It’s All About The Delivery

It’s All About The Delivery

Novel developments in delivery systems are allowing us to push the boundaries of what’s possible in biological control. 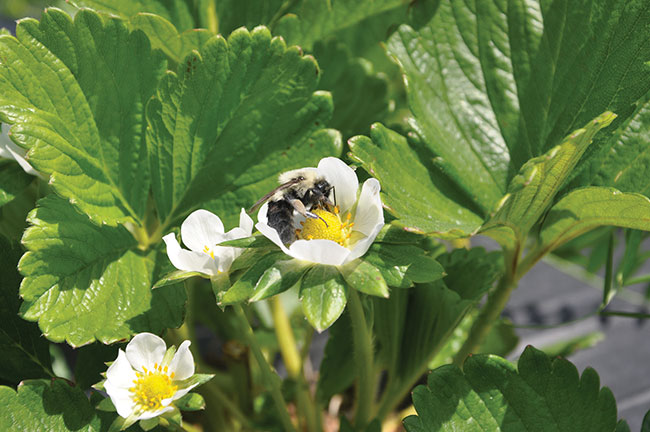 Of the number of innovative methods used to apply natural enemies and microbial control agents in the past few years, some have been rapidly adopted, others are just starting to become mainstream. Here’s a selection of new and notable developments in delivery systems, and how they could make life better for the greenhouse sector.

About 10 years ago, introduction of the mini breeder sachet for predatory mites revolutionized biocontrol programs in greenhouse crops. They rapidly became the preferred method for releasing predatory mites, and several species are now available in this format (e.g. cucumeris, swirskii, californicus, andersoni). Use of sachets provides many advantages over bulk carrier, particularly in later stages of crop production. When placed correctly into the crop, these self-contained rearing systems produce mites for four to six weeks, making them very economical to use. No carrier residues are left on leaves, mites are released where they are needed and product is not wasted on the floor. However, mini sachets have to be hung in the plant canopy for optimal performance, which is not feasible with young plants.

The biocontrol companies came up with a neat solution, by attaching a stick to the sachets allowing placement alongside vegetable seedlings, in spring bedding plants, among plugs, hanging baskets, and other young crops. While broadcasting remains an option in propagation, the steady supply of predators from a breeder sachet avoids having to make repeat (weekly) applications, and in many cases, sprays can be avoided so that plants arrive from the propagators with no chemical residues that could adversely affect biocontrol agents introduced later into the crop. 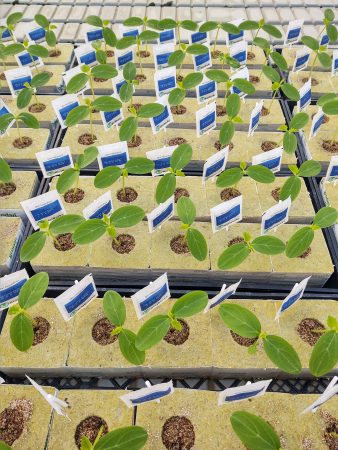 The original paper construction limits their use in some settings. For example, when used in very dry environments, the contents dry quickly and negatively affect production of both feeder and predator mites. To overcome these constraints, Koppert constructed a new type of breeder sachet from material that maintains optimal conditions inside for the production of feeder and predatory mites, even at low ambient humidity. More predatory mites can be released from the sachet over time, leading to improved control of pests. What’s more, the sachet is biodegradable. Swirski Ulti-Mite (for thrips and whitefly) was first released in North America in 2017, and has been successfully used in outdoor pepper production in California, demonstrating the robustness of this system. The manufacturers recently introduced another version for N. californicus: Spical Ulti-Mite for control of two-spotted spider mite. Small changes to an innovative concept have produced breeder sachets for almost any occasion, increasing opportunities to use predatory mites across a broader range of crops and growing conditions. 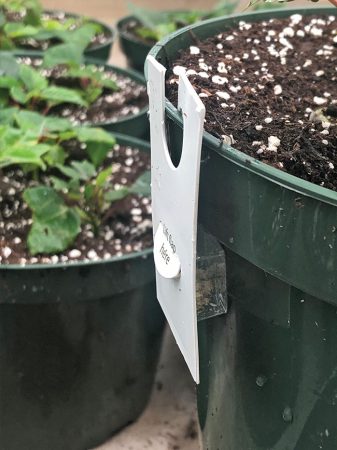 Blister packs? Sounds like something used in a medical emergency but it is the latest evolution in packaging for parasitic wasps used for whitefly control. Most growers will be familiar with the ardboard strips carrying parasitized whitefly pupae used to introduce Encarsia formosa. The same approach has been used for Eretmocerus eremicus which provides better control of Bemisia whitefly. However, unlike Encarsia which can emerge from either side of the parasitized pupa, Eretmocerus only emerges from one side. Consequently, with the pupae being glued to the card, you have a 50:50 chance of an adult wasp emerging (or not) from the parasitized pupa. Enter the blister pack. These contain parasitized pupae together with a carrier inside a plastic ‘blister’, allowing the adult wasps to emerge unimpeded. A simple, yet effective way to improve emergence rates.

Drones are very hot right now, particularly for applying predatory mites in high-value, large-acre crops where use of biocontrol agents has traditionally been limited by cost and time with dissemination by hand. Enter technology.

Use of unmanned aerial vehicles (UAVs) to carry and disperse biocontrol agents is not a new concept, but services utilizing UAVs have only recently become commercially available. Salinas-based company Parabug has developed UAV technology for the delivery of predators such as Phytoseiulus persimilis, Amblyseius cucumeris, Orius insidiosus, and parasitoids to control thrips, spider mites and other pests. The technology is being used in southern and northwestern US states to deploy predators in field-grown strawberries, almonds, fruit trees and in outdoor ornamentals. AmericanHort’s Plug and Cutting Conference last year included a live demonstration of UAVs dispersing persimilis in garden mums at Metrolina Greenhouses. 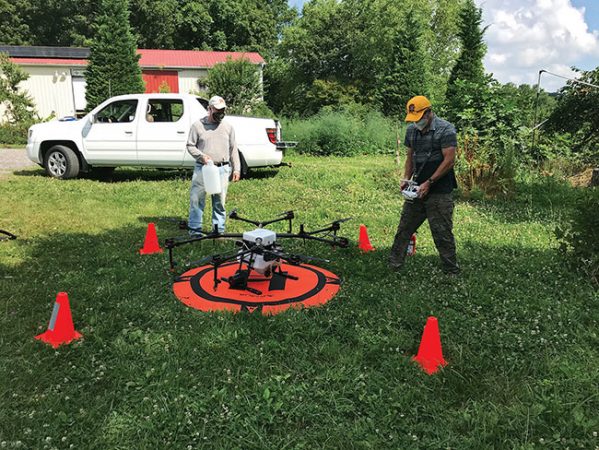 The precision and efficiency of UAVs seems to improve daily, and the technology is being adapted for delivery of other pest management products, including pesticides, enabling spot treatments with pesticides or beneficials using GPS coordinates. Christian Nansen at UC Davis sees UAVs as being part of an integrated crop management system. His work focuses on the use of hyperspectral cameras mounted on drones to detect differences in light reflected from leaves which are indicative of a plant stress response. The ultimate goal is to enable the use of image analysis techniques to differentiate among different stress factors, even down to the pest level, so that the right solution can be chosen then distributed by drones into affected areas of the crop only.

Will UAVs ever make it into greenhouses? Maybe, maybe not. But other unmanned autonomous vehicles are already in use. Think robotic sprayers in greenhouse vegetables – that technology only became commercially available relatively recently. This is a new frontier combining high tech with biocontrol, and the future awaits those with a foot in each camp!

Spraying is the default method of application for most microbial biopesticides. While better spray practices can significantly enhance deposition rates and subsequent efficacy, spraying is still a relatively untargeted and inefficient method of treating plants. Previous articles have already addressed the use of low-volume misting (LVM) systems and other methods for improved spray application of microbials, so here are some alternative delivery methods to watch for.

Bee Vectoring Technologies (BVT) in Ontario has developed a patented system that uses commercially-managed bees to deliver beneficial microorganisms to flowers. Bumblebees are preferred for greenhouse, select outdoor and some specialty crops, while honeybees are best for open fields. Active at lower temperatures than honeybees, bumbles can also be used in early spring or winter crops. Their larger size carries more microbes as well.

BVT’s dispenser system is incorporated into the lid of the commercial hive. The system includes a removable tray (the Vectorpak) that is pre-charged with Vectorite powder plus the beneficial microbe. The powder sticks to the bees as they leave the hive through the dispenser, and it is carried to and deposited into the flower. Flowers are a common entry point for a range of disease-causing organisms and a preferred habitat for many pests (like thrips), so this targeted delivery of disease-suppressive or insect-active microorganisms can be highly effective.

Currently, BVT utilizes a strain of Clonostachys rosea (BVT-CR7) as the primary ‘active’ in their system. A known antagonist and mycoparasite of several plant diseases, the fungus can also grow endophytically within plants and activates the plant’s own defense mechanisms. This can significantly reduce the incidence of Botrytis on fruit (comparable to synthetic fungicides), enhance productivity in greenhouse tomatoes and field-grown strawberries, and improve the shelf-life of harvested fruits. The fungus also suppresses other necrotrophic diseases such as Sclerotinia and Monilinia, and is effective against pathogens such as Alternaria, Phomopsis and Anthracnose. 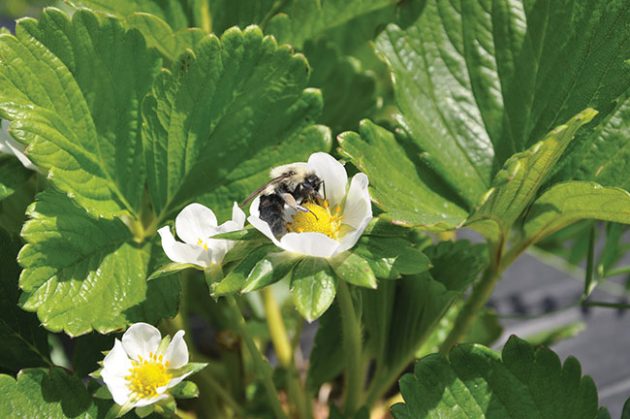 The first commercial iteration of BVT’s technology is already being embraced by strawberry growers in Florida, and the company is considering application of other microorganisms, including the insect pathogen Beauveria bassiana. Research at Agriculture Canada showed that bees could efficiently deliver the fungus to control thrips, whitefly, green-peach aphid and tarnished plant bug in greenhouse tomato and sweet pepper (Note: BotaniGard is already approved in Canada for application by bees). This would be a timely and useful application, enabling delivery of both insect- and disease-controlling organisms to traditional greenhouse vegetable crops, as well as strawberries and raspberries which are increasingly grown in protected systems.

Bacillus thuringiensis (Bt), can also be vectored by bees and could potentially provide protection against flower-feeding caterpillars. Lastly, the company is investigating use of the system to deliver streptomycin to combat bacterial and fungal diseases of fruit, vegetables and seed. Currently, the antibiotic is widely used to control fire blight on apple and pear trees and is applied by spraying. Delivery by bees would mean virtually no contamination of the surrounding environment and would ensure continual delivery of the protectant throughout the bloom period, something which cannot be guaranteed by spraying.

Bee vectoring is a highly targeted delivery system that uses no water and saves growers from repeated spray applications of pesticides. BVT self-describes their technology as a “natural precision agriculture system.” Can’t argue with that. No batteries required!

Other vectors of microbial control agents
In commercial greenhouses, use of bumblebees as pollinators is largely restricted to tomatoes, eggplant and, on a limited scale, peppers. This technology is not applicable to other edible crops such as cucumbers and herbs, or in floriculture, but other arthropods could be used as vehicles to transport beneficial microorganisms. Work at the Université de Montréal by Gongyu Lin assessed the susceptibility of predatory mites to B. bassiana strain ANT-03 (BioCeres), and their capacity to acquire spores, which would then be transported into thrips-infested areas. Results showed that all mites could carry B. bassiana spores, and while active against western flower thrips, strain ANT-03 was benign to Amblyseius swirskii and Stratiolaelaps scimitus, with low virulence towards Neoseiulus cucumeris. B. bassiana GHA strain (BotaniGard) is also compatible with those microorganisms.

The beauty of this approach is that foraging mites can transport fungi to parts of the plant where pests like thrips (which like to live in tight, concealed places on the plant) are very difficult to reach using conventional spraying techniques. Furthermore, predators preferentially consume young thrips larvae, while older larvae and adult thrips are more susceptible to the fungus. Consequently, use of the two biocontrol agents together could provide a very elegant means of targeting all foliar stages of the pest.

In small ‘proof of concept’ greenhouse studies carried out by Anatis, thrips control was better on plants receiving the mite-fungus treatment than those treated with the mite or fungus alone. Greenhouse trials completed in China showed that this approach can work in practice, and N. cucumeris and A. swirskii were used to disseminate B. bassiana which infected Asian citrus psyllid, Diaphorina citri, on potted citrus plants. As with bee-vectoring of beneficial microbes, this method has the potential to deliver savings by reducing or eliminating direct costs associated with spray applications (skilled labour), reducing the amount of ‘active ingredient’ required to obtain control, and eliminate disruptions to production associated with chemical applications.

Formulation and delivery: key areas for development
New delivery techniques are changing and expanding opportunities to use biological control on a large scale. Just as a good formulation is essential to the survival, stability, ease of use and efficient application of any biological product (microbial pesticide or biocontrol agent), the application method has a direct impact on efficacy and cost-effectiveness. Continued development and improvement of delivery systems will allow us to push the boundaries of biological control, enabling earlier and more targeted interventions, while also bringing associated health and safety benefits, and improving sustainability.

Michael Brownbridge, PhD, is a biological program manager at BioWorks Inc. Email him at mbrownbridge@bioworksinc.com.